There is no test script. There is built in debugging tools that can help you develop your code and perform grading.

Your code should compile with javac

Note, if you are developing this project on a windows machine, you must use the github bash terminal in vscode for the pipeline to run properly.

In this project, you will complete a point simulation of a city of mice, cats, and zombie-cats! Once your simulation is visualized, it may look like the animation below.

You’re job in this lab is use good OOP to design this simulation.

A tour of the starter code #

In the repository, you are provided with the following Java files that you should review. They are heavily commented, and will provide the guide posts for completing this project. Not all details are described here, so I strongly encourage you to read through the entirety of the code provided for you.

A class that represents a basic creature in the simulation. You’ll need to extend this class for your mice, cats, and zombie cats (and more!).

This class represents the city/space in which the creatures live. All the creates are stored in the creatues list:

Importantly, the City class has a method simulate that describes the primary routine of each iteration off the simulation. You cannot edit this method, but you should review it carefully because it will dictate how you design your other classes. This routine is provided below:

Reading through the simulate method, you see that first, all the creatures are moved forward by taking a step in the simulation. This could move the creature in a direction, determine if it starved, or other general state changes.

In the takeAction method, each creature assess its surroundings, determines if it should eat something, chase something, or do something.

After all the actions are taken, any creatures that are dead are removed from the creatures list. And then any new creatures are added. Note that there is a method addNewCreatures that is provided for you, and duplicated below.

This method clears the creaturesToAdd queue. So if you want to add a new creature, you construct it and add it to this queue. There is an example of this in the constructor of the City.

This class has the main method for the simulation. You may need to do minor modifications to this while editing and to meet the requirements of the assignment.

This class implements a row/column pair that can be used as a key in a map. You should read this class, but you will not need to edit it.

Running, Visualization and debugging your simulation #

Like in Lab 6, we will separate the simulation from visualization.

You can run the simulator with the following arguments:

The output of the simulator is a series of x and y coordinates describing the locations of each of the creatures. It may look like below:

Like in Lab 6, the first two numbers are a coordinate, and the letter is a color. Once complete, the done command is given. Different from Lab 6, done also outputs the round number.

Optionally, you can include --DEBUG as the final argument, like below, if you want to iterative step through the simulation

A quick note about the simulation space. It’s a torus. That means when you go off one edge, you wrap around to the other edge of the board. You can see this in the animation above. Your code should account for that.

Like in Lab 6, we’ve provided a plotting tool Plotter.jar which you can pipe your output to, like so

This will open a visual, like the animation above. There are two arguments you can provide to the plotter. 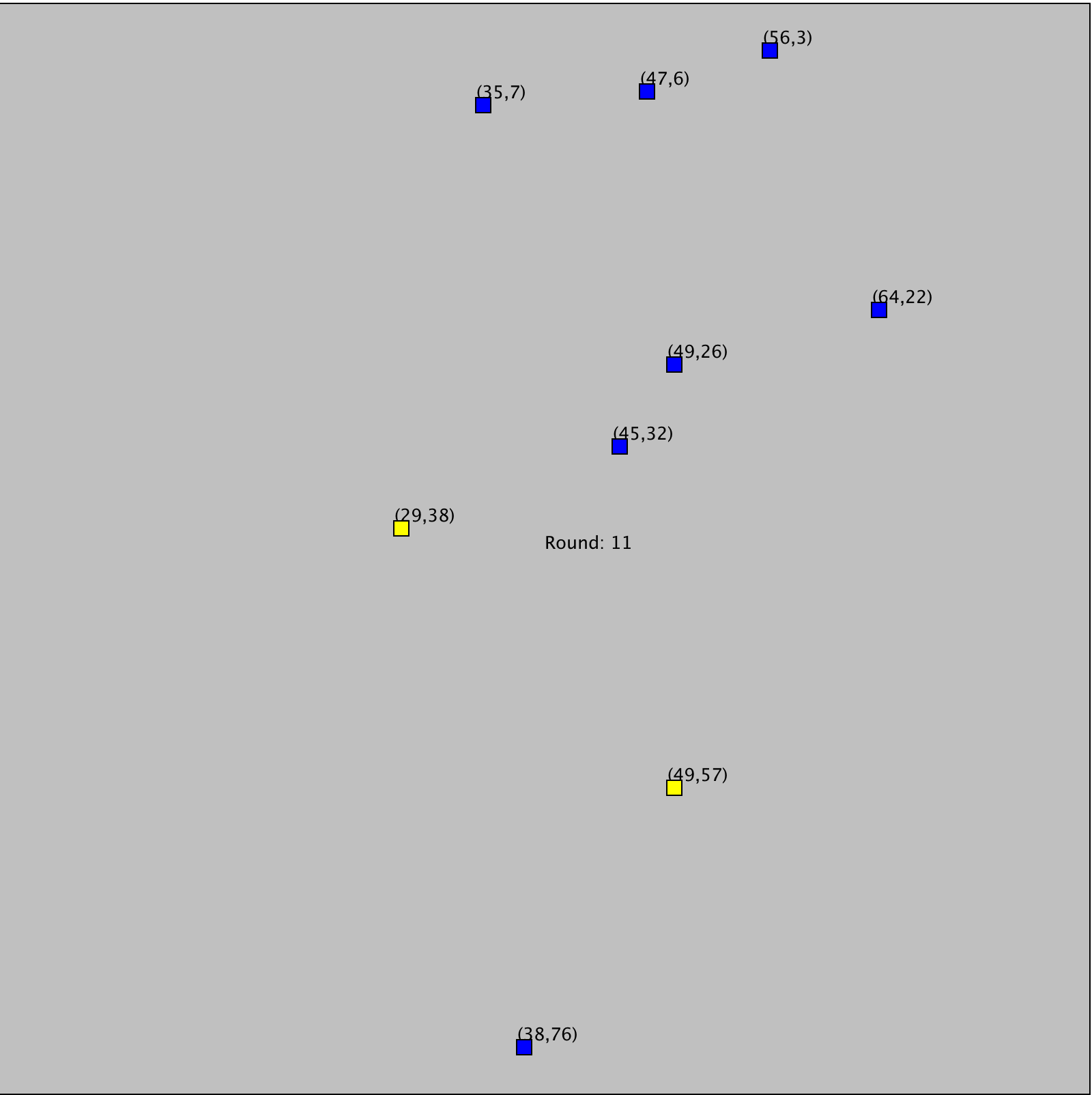 Note that you can combine these two arguments, but you must set the millis first, and then the debug flag.

DEBUGGING TIP: If you want to connect your simulator to the plotter, but also print out debug information from your simualor code, use System.err.println() methods. Only items printed to stdout are passed to the plotter.

There are two requirements for this project. The first requirement (Part A) involves presenting a UML diagram for your project that describes the Creature object relationships as well as how you utilized OOP design. The second requirement (Part B) is to actually implement the code.

For Part A, you should complete the following items and discuss them in a 5-minute meeting with a TA or LA during lab or office hours. Both should also be included in your github repo.

In your meeting, be prepared for feedback that you should incorporate into your project.

There are different levels of implementation you should complete. Note that in README.md file, you must indicate which level you reached. You should submit working code up to one level. It is very difficult to provide partial credit for semi-working code that doesn’t fully achieve one of the levels.

Full implement mice actions such that:

Add a cat to the simulation

Additionally, in your simulator, have it such that

In this level, cat’s get a bit smarter …

First a modification to Cats:

The final level of the simulation is for you to add a new creature of any type or behavior you want to the simulation. It should fit into the general model of creatures we already have and derive from Creature.

You should include this extra creature in the planning stage (Part A of the project), and fully describe its functionality in the README.md file.

Particularly creative creatures may be subject to bonus points (up to 5), at the description of the grader.